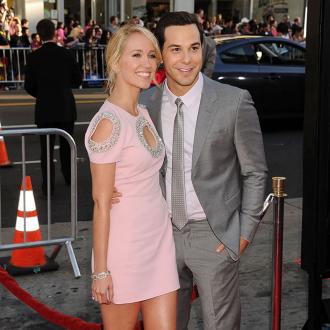 Anna Camp is enjoying single life now her divorce from Skylar Astin has been finalised and she admits she feels ”free for the first time in a very long time”.

The ‘Pitch Perfect’ stars ceased to be husband and wife in August just four months after they announced their break-up back in April, which came after two years of marriage.

Anna, 36, is now ”excited” about what the future holds for her romantically and professionally now she is on her own again with Skylar, 31, out of her life.

Speaking to ‘Entertainment Tonight’, she said: ”I feel kinda free for the first time in a very long time, for lots of reasons. I feel very excited and very grounded at the same time, which is great. And I haven’t felt this way in, like, a while. So it’s a new thing for me, which I’m excited about.”

Anna and Skylar met during filming on the first ‘Pitch Perfect’ movie in 2012, and began dating a year later in 2013 before marrying in October 2016.

It is the ‘Café Society’ star’s second marriage as she was previously wed to actor Michael Mosley from 2010 to 2013.

Although Anna is open to finding love again she is adamant that she is not going to rush into another relationship as she now knows she can be perfectly happy on her own.

She said: ”It’s a journey. It’s a long journey, but I definitely feel like I’ve taken some steps that are, you know, scary at times, and I feel like I’m stronger than I thought that I was, and that is also very empowering for me, and I think that’s translating into my jobs and the work that I’m taking, so also into my personal life. So yeah, it feels pretty good.”