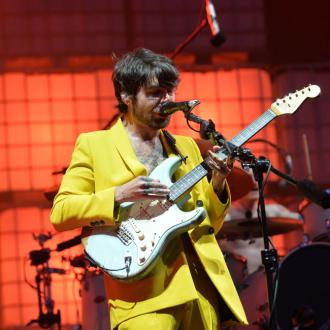 Biffy Clyro ”fell in love with noise again” after doing the MTV ‘Unplugged’ tour and album.

Frontman Simon Neil has admitted that whilst they enjoyed performing stripped-back renditions of their songs on the special run and record in 2018, they soon realised just how much they missed making heavy rock music.

”This is a record that only our band could make, I think.

”After doing the ‘Unplugged’ album, we realised we weren’t at that stage yet as a band.

”We loved doing the ‘Unplugged’ tour, but I think if anything it made us fall in love with noise again.”

The ‘Wolves of Winter’ hitmakers’ soundtrack LP ‘Balance, Not Symmetry’ and working with producer Rich Costey, the studio wizard behind their last studio effort, 2016’s ‘Ellipsis’, also inspired them to turn up the volume and return to their heavier rock roots.

”We went back to work with [‘Ellipsis’ producer] Rich Costey for a second time, and things became easier there – your communication becomes a lot more unsaid the more you work with someone.

”I compare ‘Ellipsis’ to ‘Blackened Sky’ and ‘Puzzle’, which were the first records we made with those producers [Chris Sheldon and Garth ‘GGGarth’ Richardson] – they’re quite clean records, and you can hear that we’re still feeling each other out.

”This record feels in line with [2003’s] ‘The Vertigo Of Bliss’ and ‘Only Revolutions’ [the second albums from each of the preceding trilogies] – what we’re trying to achieve with this series is beginning to take shape and blossom.

”We felt fearless, and it’s nice to feel like we’re finding our own way.

”Standing in a room making a s***-ton of noise with your buddies? Nothing beats it, and I think that’s what we’ve rediscovered.”