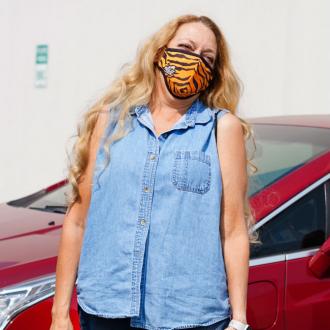 Carole Baskin’s husband ”will be so happy” after her ‘Dancing With The Stars’ elimination.

The ‘Tiger King’ star – who married Howard Baskin in 2004 – has been competing on the programme with professional dancer Pasha Kovalev, and she was bottom of the leaderboard this week with just 12 points out of 30 for their ‘Circle of Life’ routine.

She said: ”My husband will be so happy that I’m coming home.”

The 59-year-old star – who runs the Big Cat Rescue sanctuary in Florida with her husband – delivered ‘Lion King’ themed performance for Disney Week, and opened up on the media giant’s portrayal of wild animals ”living free” before her routine.

She also noted that any wild cat born in a cage can’t be released after being raised around people.

She explained: ”On the sanctuary, we don’t breed big cats because we know they don’t belong in cages.

”We’re gonna make their lives better than they have ever been before.

”Yet at the same time, I know I can’t give them the one thing they really, really want. And that is their freedom.”

Last week, Carole opened up on the impact of Netflix series ‘Tiger King’, which focused on her feud with former G.W. Zoo owner Joe Exotic, who is currently serving 22 years in jail on two counts of hiring someone to murder Carole and multiple violations of animal welfare laws.

Speaking Pasha about the fallout, she said: ”I keep it inside. That is the absolute worst of this.”

Despite Joe’s criminal actions, ‘Tiger King’ viewers considered him an anti-hero, whilst Carole was branded a villain due to Joe losing his animal park as well as his freedom, and the rumours that were given screen time by the filmmakers about the mysterious disappearance of her second husband Don Lewis.

Carole previously insisted she is ”not at all the person” she was portrayed to be in the documentary, as she is simply desperate to see animals free from harm.

She said: ”I am not at all the person I was portrayed in ‘Tiger King’. I am not the money grubbing, gold-digging, murderous person that they portrayed.

”I am the type of person who will come after any person who is abusing animals. I am relentless. I just won’t stop until I find some legal way to make it stop. From that perspective, I think they got me right.”