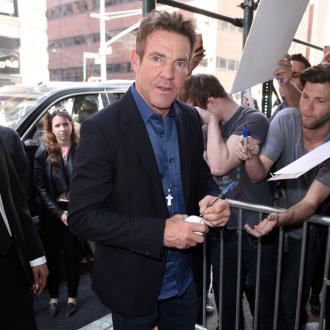 Dennis Quaid plans to get married within the next year.

The ‘Merry Happy Whatever’ star popped the question to Laura Savoie last month and planning their big day ”happened the next minute” after she said yes because he thinks it’s important not to have too long an engagement.

”You’ve got a year, right? And if you go past a year without getting married, then you’re suspect. That’s basic etiquette.”

The couple got engaged in Oahu, Hawaii, and are planning to return over the festive season.

Dennis said of their Christmas plans: ”I think we’re going to go back to Hawaii. We had such a good time there before.”

The 65-year-old actor recently admitted hr had spent six weeks planning his proposal but in the end, he decided on a whim that he would pull out the engagement ring while they were taking a selfie in front of the beautiful sunset over Turtle Bay.

He said: ”I had the ring in my pocket. It has been kind of a month-and-a-half plan — I wanted it to be private.

”She was actually taking a selfie of us, [in front of the sunset] and I put the ring in front and said, ‘Will you marry me?’ And then she fell down.

”It happened on the very northernmost point of Oahu, at Turtle Bay. It was kind of spontaneous. It was very much a surprise.”

The ‘Parent Trap’ actor has been dating the 26-year-old student – who is working on a Ph.D. at the University of Texas – for several months.

He has one son Jack, 27, with Meg and 11-year-old twins Zoe and Thomas with Kimberly.

Legally Blonde 3 Has A Script And A Release Date

The Wonder Years To Be Rebooted With A Black Family By...