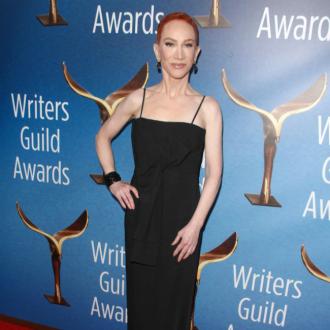 Kathy Griffin has praised Kim Kardashian West for being a supportive neighbour.

The 59-year-old comic used to live next door to the ‘Keeping Up with the Kardashians’ star – who has kids North, six, Saint, four, Chicago, 23 months, and Psalm, eight months, with husband Kanye West – and could always turn to her pal for help, no matter where she was in the world.

Asked what she’ll do now Kim and Kanye have moved away, she said: ”I would probably still text Kim and say, ‘Can you messenger a cup of sugar?’ Then she’d probably text back from God-only-knows-where on the planet.

”There have been times when I’ve texted her, thinking she was next door.

”This was really sweet – I don’t know if I ever told anyone this story … One time my mom was here when she hadn’t yet fallen into dementia and said, ‘I’ve been feeling kind of depressed.’

”I panicked and called Kim. I was like, ‘I know this is weird but is there any way you could send the kids over? Just for half an hour? It would cheer her up so much.’

”So she, God love her, instructed the nannies to bring two of the kids over.

”I have the cutest videos of my mom playing with East, South, whatever and Sinner, whatever their names are – the first two.

”But my mom just cheered up. It was so meaningful.”

Kathy recently thanked Kim for keeping news she was to marry Randy Bick on New Year’s Day (01.01.20) a secret.

She shared a photo taken on Christmas Eve (24.12.19), and wrote: ”Shoutout to my ‘maid of honor,’ @kimkardashian! Thanks for keeping the secret.(sic)”

Watch The Teaser Trailer For Quentin Tarantino’s Once Upon A Time...