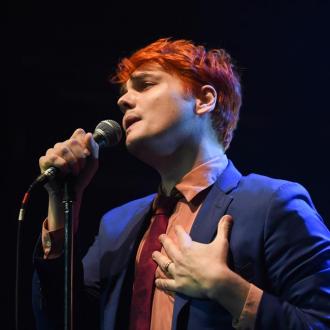 My Chemical Romance appear to be teasing a UK show in June.

Gerard Way and co delighted fans by reuniting for a concert in Los Angeles in December, six years after they went their separate ways.

And the ‘Black Parade’ hitmakers have since set tongues wagging about their plans for their fans this side of the pond by posting the Union Jack flag emoji and a spooky figure on their social media accounts.

They’ve now shared a video with the flag and the month of June spelled out in the Theban alphabet.

Many believe the ‘Helena’ rockers – completed by Ray Toro, Frank Iero and Mikey Way – could be cryptically teasing a special performance at Download Festival, which takes place between June 12 and June 14.

This year’s rock extravaganza at Donington Park in Leicestershire already has headliners in KISS, Iron Maiden and System of a Down, so it would have to be a special slot.

Meanwhile, as per the emo legend’s agency Paradigm, their sold out LA gig grossed $1,451,745 – a record for the Shrine Auditorium & Expo Hall venue.

The band admitted they’ve been blown away by the response to their comeback.

Just days after the initial announcement, they wrote: ”It is truly unbelievable to us the happiness we have experienced over the past two days. From the bottom of our hearts, thank you for the warm welcome back. We truly did not expect this. See you soon. Xoxo, MCR (sic).”

The group secretly reunited in 2017, before announcing to fans their big reunion in October.

They tweeted in December: ”In 2017, we got in a room together to see what would happen. A couple more jam sessions and 39 days of rehearsals later, we’re ready to show you what we’ve learned. See you soon.”