Whilst some parts of the country had to deal with flash flooding, roads collapsing and even dams near to bursting, Neverworld Festival bathed in its own micro climate of largely warm, sun-filled weather and combined it with a thoroughly sun-drenched disposition. The mermaids and pirates, and even the odd silk-clad bride and groom came out to party in the Kent countryside for yet another great weekend of fantastic music. 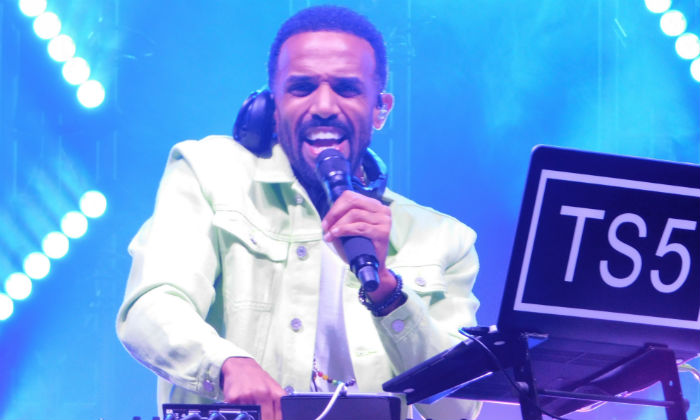 Poseidon strode imperiously between each of the themed arenas as he surveyed the bright, beautiful, bejewelled and bedazzled party people that had come to enjoy the delights on John Darling’s farm. Some of the mermaids and mermen may have looked like they had partaken in one too many fish suppers without swimming the calories off the following day, and some of the pirates would have struggled to walk a straight line down the plank, but it is fair to say that nearly everyone made an effort to get into the spirit of the family friendly festival; even some of the dogs sported tutus and tiaras!

With an eclectic mix of established acts, up and coming talent and resurgent household names, Neverworld once again balanced its roster to offer up a superb combination of musical entertainment. There was a folk festival in the woods (including a Woody meets Pee Wee Herman turn by the name of Perry Bryan), D&B and Reggae in Skull Ridge, Hardcore Punk in Hooks Rock, perpetual dance music over at Miami Beach, a plethora of diverse acts in the Circus tent and the magnetic pull of the headliners over on the main stage.

Thursday’s gentle start saw the Circus tent deliver up a great introduction to this year’s festival. Blossom Caldarone lit up the room as she played her latest single ‘Perfect Too’, Everyone You Know played out a captivating set enhanced by tiny-tot Noah who thoroughly enjoyed the band’s beats (including their lyrically explicit ‘Our Generation’ and especially ‘The Drive’), and Mystery Jets packed out the tent for a first night finale that started with ‘Telomere’, took in a fabulous ‘Bubblegum’, a pumped up ‘Two Doors Down’ and a heartfelt ‘Flakes’; a song that two of the Jets dedicated to the blue-eyed, glistening and glittered man in the audience they had both fallen in love with. Over at the beach, Craig Charles brought his “trunk of funk” to the Art-Deco dancefloor as he saw out the first night in exuberant and celebratory style.

Neverworld woke up to bright sunshine on Saturday after well-behaved rain that had only fallen out of festival hours. The Vaccines tore up the main stage with their infectious, anthemic blend of Indie power pop. The crowd were word perfect for ‘Wetsuit’, ‘Post Break-Up Sex’ and ‘Wreckin’ Bar’. Justin and the rest of the band were on fine form in front of a huge crowd as they played out a set that delivered on every level, including the very impressive firework finale. Before them, Futureheads had enjoyed themselves after driving down from Sunderland to play, amongst others, a belter of a new track in ‘Good Night Out’ as well as their perennial party piece – complete with requisite sing-a-long – ‘Hounds Of Love’. Returning festival favourite Tom Grennan, joined by his white-robed gospel entourage, wowed the audience once more with his soulful songs and his rasping vocals. ‘Aboard’, ‘Sober’, and crowd-pleaser ‘Found What I’ve Been Looking For’ sounded fantastic as Tom delighted his fans, taking time out to check out an “intriguing” neon hat with his name on and pledging that he would “definitely” be back again next year.

Perhaps the biggest surprise of Saturday came later on in the evening. After the climax of The Vaccines’ set it was over in the Circus tent that Black Honey delivered up one of the festival’s real highlights. Izzy and her band drew a crowd of wildly differing age groups as they played out a sensational set. In her 70s platform boots, red shorts and coordinated, zipped-up, tank-top blouse, Izzy made for a captivating frontwoman. Old favourites ‘All My Pride’, ‘Corrine’, ‘Spinning Wheel’ and finally ‘Somebody Better’ were mixed in with newer tracks including ‘Crowded City’ and latest release ‘I Don’t Ever Wanna Love’ to deliver up a succinct set that packed a punch. Izzy’s sassy strutting and playful vocal combined with Tom’s tight rhythms and Chris’ razor-sharp guitar riffs ensured each tune was showcased to its greatest effect.

The Circus tent was the scene of many other surprising highlights over the weekend. An entire solo performance kneeled on a raised platform saw a pink clad Babii play out tracks from her album ‘Hiide’, including ‘Caniivore’ and ‘Seiizure’. Potty-mouthed ‘Ashnikko’ sang songs about her sex life, her sex toys and her body being hers and hers alone to an audience transfixed in a mix of bemusement, trepidation and excitement. The tartan trousered rapper was pumped up and snarly, pounding the stage with attitude and anger. Despite a couple of technical difficulties, ‘Stupid’, Working B**ch’ and finally, one of her most recent songs, ‘Special’ sounded terrific. Lauran Hibberd and her band failed to hide their disappointment with the size of their audience which was a shame as her set was really good. The So-Cal soaked guitar driven indie pop about, amongst other things, blow jobs and 90s disses, gave rise to pitch perfect performances of ‘Sugardaddy’, ‘Frankie’s Girlfriend’ and last year’s top tune ‘Call Shotgun’.

Craig David had no trouble with audience numbers as he drew the biggest crowd of the weekend on Saturday night. David was his amiable and well-behaved self with no need to bleep and “no time for negativity”. Fresh from gigs in Ibiza and a performance on Love Island, CD was immaculately turned out as he brought his TS5 show to the main stage for the final show in the biggest arena. Craig David was in good voice as he sang, speed rapped and DJed through an eclectic set that veered between TLC’s ‘No Scrubs’, House Of Pain’s ‘Jump Around’ and his own classics ‘7 Days’ and ‘Fill Me In’. His love for what he does, for his appreciative audience and for festival founder Lee was clearly evident as he imparted his feelings to the crowd.

Ahead of Craig David, a ‘totally hanging’ Professor Green scurried around the stage like a man with ants in his pants. Calls for him to remove his top were finally realised as he walked off set after whipping up the crowd with a mix of old and new tunes, aptly capped off by a great version of ‘Read All About It’. Before him, another of Neverworld’s returners got the crowd singing along to nearly every tune. Lucy Spraggan, this year with a full band behind her, sang her heart out with her comical, endearing and entertaining songs including her staples ‘Last Night’ and ‘Tea And Toast’. Ahead of Lucy, Alma gave an impassioned performance of ‘Die My Hair’ and a superb close-out track in ‘ Chasing Highs’. Earlier in the day, Lissy Taylor and her band delivered another great set containing some fantastic new material. Lissy’s vocal continues to mature along with her songwriting. ‘Ghost In A Summer Dress’ and, in particular, ‘Quiet Rage’ were the stand-out tracks of the early afternoon set.

Elsewhere over the weekend the party atmosphere was in full swing. There was the magnificence of the technicolour Paint Fight, some determined Glitter Wrestling started by youngsters Alfie and Henry (Alfie won his first 4 bouts and is probably still, rightly, buzzing) and some inspired drumming courtesy of Sambattalion. The Pirates over at Skull Ridge scared and enraptured kids all weekend in equal measure. There were some very sweaty and passionate Punk performances over in Hook’s Rock and to cap it all off a tent full Conga dance to round out a quite brilliant set delivered by Dream Wife.

Neverworld once again came up trumps with its inspired and eclectic line-up that managed to captivate a broad range of music fans. The headliners ensured that The Fortress Stage was packed out but some of the less well known, up and coming acts will linger just as long in the memory with their individual performances. John Darling’s Farm may not play host to one of the biggest festivals of the year, but it does remain one of the best and surely most inclusive.