If you live in Brighton I guess there’s no finer place to start your current tour than Komedia. For her first solo gig in her adopted town, Poppy Ackroyd chose the venue to kick off her British and European jaunt. A stones throw (if you’re a pretty good pitcher) from The Brighton Dome and two blocks away from The Lanes of Brighton, Komedia stands out with bold flashes of light like the most extroverted building on the street. 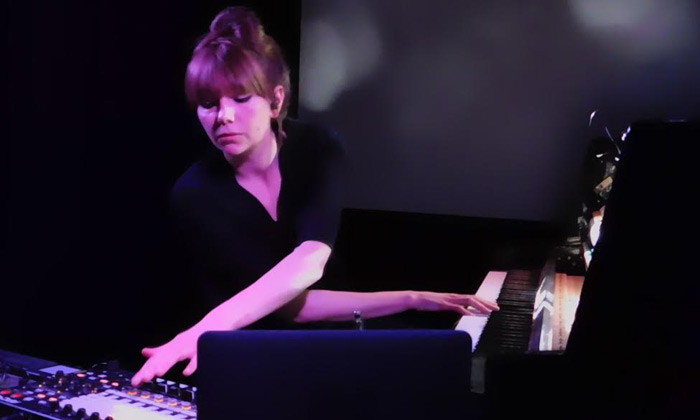 ‘The Best Venue In The South’ (for comedy) proved to be something of an unintended contradiction of sorts. Instead of stand-up, we got sit down. Arriving on stage a little later than billed, Poppy Ackroyd took to her seat in front of her transformed and refashioned piano. As she settled, she politely asked those before her if they’d mind sitting so that others at the back may see. “I’m not going to tell you what to do; I’m just going to tell you a little bit… One guy’s down, one guy’s sat down” she cried out and pointed as the first of the early adopters showed the way. Many others followed suit and took to the floor; rather like a primary school class sitting on their mat in front of Miss.

With the poise and elegance associated with any classically trained artist, Poppy Ackroyd looked like she was immersed in her music before she’d even played a note. As she re-familiarised herself with her equipment she also waited for the hush of the room to find its level. There was an almost palpable increase in the nervous energy of the collective group born through the anticipation and excitement of seeing one of the most extraordinary artists currently playing.

With much of the crowd now seated, and Poppy fully prepared, she set about delivering her unique music as only she can. ‘Resolve’ was the first of the evenings tracks. The title track from her 2018 album, her first for One Little Indian Records, was a great introduction to the night. The opener was a pure piano arrangement and adeptly showcased Ackroyd’s talent as both a composer and as a musician. The clarity of the keys and the intimacy of the setting were fantastic.

Poppy Ackroyd mixed up her set with tracks from all of her releases to date. She played out both ‘Time’ and an extended ‘Timeless’, the latter proving to be one of the highlights of the night. Starting with her electric violin, she looped her soundtrack before taking to the keyboard. Ackroyd gave us all a lesson in creativity as she produced a variety of sounds from her adapted instrument. She played her keys, plucked its strings and even showed us how to use it as a percussive framework. It was quite mesmerising and just a little magical.

The evening went from one glorious track to the next. Poppy’s, and mine as it happens, favourite also saw a marvellous performance and faultless delivery. ‘Feathers’, with its revolving rhythms and undulating texture, feels like it has its origins emanating from ‘Tubular Bells’ but with a contemporary, fresh twist that draws you in with each note. This track is so compelling and so engaging, it grabs you like a restless entity that wants to unravel and reveal itself before you and it never fails each time you hear it.

Ackroyd played a few tracks from her first record, ‘Escapement’, including a sublime and serene ‘Seven’, however it was right that her latest release provided most of the material for the evening’s set. She was majestic at the keyboard and enthralled all before her. ‘The Calm Before’ was a joy to hear and towards the end Poppy delivered a masterful performance of ‘Trains’. “I know it’s a school night so I won’t keep you,” she said. She thanked people for sitting down and apologised if they had dead legs before taking a bow to rapturous applause.

Poppy played a solo set throughout; there was no support act and her performance was only accompanied by some very well chosen black and white video footage that illuminated the projection screen behind her as she performed. To see such a creative, artistic and talented pianist so close up in such intimate surroundings was a real privilege. Ackroyd is one of a handful of artists currently bridging the gap and blurring the boundaries between classical and contemporary music. Her neo-classical style clearly has a broad spectrum of appeal. She is forever breaking new and exciting ground with her compositions and it was evident to see with tonight’s audience that she has ignited more than just a spark of interest.