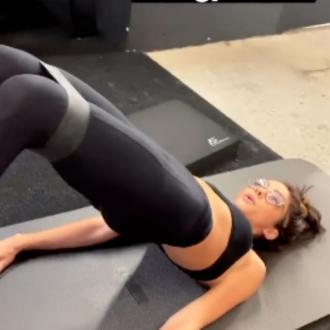 Sarah Hyland is only working out to be ”wedding body ready.”

The ‘Modern Family’ star has been documenting her gruelling exercise regimes on her Instagram account and has joked that she’s putting so much effort in at the moment because she wants to make sure she looks her best when she walks down the aisle and ties the knot with her beau Wells Adams in the near future.

Alongside a video of her doing hip thrusts, she wrote: ”Prep for a secret shoot next week! …but let’s be real. The end goal is wedding body ready…. (sic)”

And, although she’s putting all the work in at the gym, the 29-year-old actress recently said she and Wells, 35, are yet to set a date for their big day.

She said at the end of last year when asked about her wedding: ”We have not set a date or anything. We’re trying to really just enjoy being engaged.”

However, the brunette beauty has decided she’ll have eight bridesmaids – including her friend Vanessa Hudgens – accompany her down the aisle when she says ‘I do’.

The couple got engaged in July last year in Fiji but Wells faced several setbacks before he eventually proposed as almost didn’t have a ring to put on her finger.

The hunk admitted so many things went wrong and he only managed to get the diamond jewel ”a few hours” before their flight.

The ‘Bachelor in Paradise’ star said: ”We were planning to go three days after I was done filming …’in Paradise’.

”So I had to get everything ready for that moment like months in advance. I flew back from Mexico, had to get the ring, get on a plane and went to Fiji.

”(So many points fell apart) a couple of things were messed up. So I got the ring from Lorraine Schwartz and they were like: ‘Don’t worry, you’ve got plenty of time to come pick it up.’ And they sent me the address when I flew back from Mexico. So I got in my car and it was like 45th Avenue on the 17th floor and I was like… ‘Interesting’ and it was taking me to Pasadena. I didn’t know there were any high-rises in Pasadena but let’s go. So I get all the way there and there’s like no building with the 45th floor so I texted her and I was like: ‘Where is this building in Pasadena’ and she’s like: ‘No! It’s in New York.’ And I’m like: ‘Well I’m in Los Angeles, guys!’

The Wonder Years To Be Rebooted With A Black Family By...