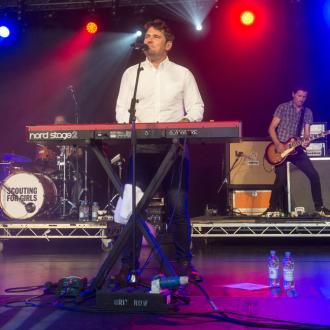 Scouting For Girls‘ Roy Stride says he would still be working at Carphone Warehouse if it wasn’t for the success of ‘She’s So Lovely’.

The British pop rock group’s hit single stayed in the UK top 10 for six consecutive weeks in 2007, and the frontman says without it doing so well and standing the test of time, he’d still need his old job at the phone store to keep him afloat.

He told the Daily Star newspaper’s Wired column: ”She’s So Lovely is a magic song, I think if I didn’t have that song I’d be working back in Carphone Warehouse!

”Every band that has a long ­career has one of those songs, and that’s ours.

”I see these people at sixth form parties, these kids who are like 18, were five when the song came out, and they’re going crazy at a party when that song comes on!”

The 41-year-old star – whose band’s album and singles sales exceed over 15 million – says when they play the song live they always leave it to the end of their set and they perform it just how they did when it first came out.

Scouting For Girls have just released their first album in four years, ‘The Trouble with Boys’, which is about staying young forever, and the ‘Elvis Ain’t Dead’ singer says he can’t believe he gets paid to have ”fun” and compared playing festivals to going to a ”massive adult theme park”.

Roy said: ”Being in a band and signed to a record label you have people doing all this s**t for you, they put your stuff on stage, have loads of beer in the dressing room, and you even get a buggy from the dressing room to the stage!

”It’s like this massive adult theme park which I’m being paid to be at! ”I always have a fridge full of beer and get to watch these amazing acts.”