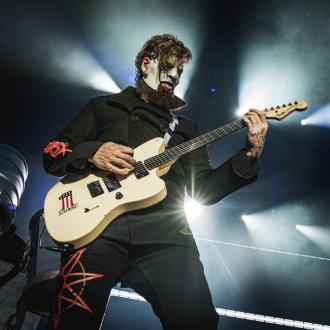 The Corey Taylor-fronted heavy metal group’s co-founding member was tragically found dead in a hotel room in May 2010, aged 38, and the 48-year-old guitarist has revealed he has been visited by Paul – who was also known as the Pig – in his sleep.

He told i-D: ”I’ve been having a lot of bizarre dreams about deceased people lately.

”Paul has been showing up in my dreams a lot.”

Jim believes that it could mean he hasn’t ”fully grieved” for his bandmate yet.

Describing his dream, in which he saw Paul brought back to life but like a ”zombie” and driving with his widow Brenna, he continued: ”It’s a little bit weird; maybe I haven’t fully grieved Paul being gone, maybe I shoved that somewhere deep down inside.

”But in the dream, he had come back to life.

”He had passed on but he was alive and with his wife, his widow, and they were in this blue sports car.

”He was typical old Paul, but he was a reanimation of himself, like a zombie.”

He concluded: ”So it stirs up a bunch of weird emotions and I’m thinking that maybe it ties into the situation I’m in now.

”Because I know there’s a person inside there, but I think they have some narcissistic, possibly sociopathic tendencies.

”Maybe that’s what that dream meant … because it’s Paul but it’s not really Paul, you know?”

Slipknot’s current bassist is Alessandro Venturella, who recently insisted he was never trying to replace Paul in the band, but has learnt a lot from the late star’s bass-playing gift.

He said: ”My approach isn’t the same as Paul’s. I can’t be him and never will be, every player is ultimately born different.

”That said, if you listen to Paul’s note choices on ‘Vermilion’, he was all over the shop and it sounded great. I wanted to try things like that.

”After listening to his stems, I honestly looked at bass in a different light and understood how to support everything as the backbone.

”Take the bass out of the mix and everything will fall flat on its a**e – and equally, if you mix too bass-heavy, you’re not going to get your point across either.

”Lead guitarists, on the other hand, always need to cut through because that’s what the job entails. As the rhythm section, we’re there to hold the fort.”