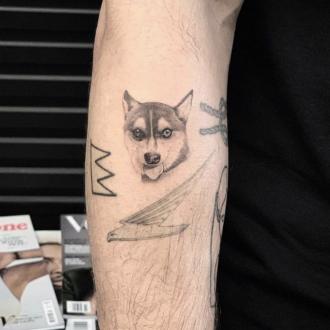 Sophie Turner and Joe Jonas have got matching tattoos in honour of their late pooch Waldo Picasso.

The couple – who married earlier this year – tragically lost their canine companion last week when he it was struck by a car in New York City, and to honour the memory of their pet, they’ve both gone under the needle to get brand new inkings.

Sophie, 23, posted a picture of her new tattoo on her Instagram Story, where she wrote: ”I miss you, Waldo. Rest In Peace my little baby.”

And 29-year-old singer Joe posted an image of a similar tattoo on his own Instagram account, alongside the caption: ”R.I.P. my little angel. (sic)”

Last week, it was reported the Alaskan Klee Kai was being walked on the lower east side of Manhattan by the couple’s dog walker when it broke free from its leash after being spooked by a pedestrian.

The dog was then hit by an oncoming vehicle in what a representative for the Jonas Brothers star called a ”freak accident”.

Taking to the social media platform, he wrote alongside a heart and a palm tree emoji: ”I found happiness #discoversoneva (sic)”

Joe and the ‘Game of Thrones’ actress legally married in May in Las Vegas before having a larger ceremony in France last month, and the actress previously revealed her dad was ”beyond pleased” when she tied the knot.

She said: ”My dad was beyond pleased when I married a musician because it was always kind of, ‘You have to marry a rugby player or a musician.’ So I got one of them right … He’s getting into the Jonas Brothers. They weren’t his demographic, but he’s getting into them now and he loves them and the new music is fantastic.”