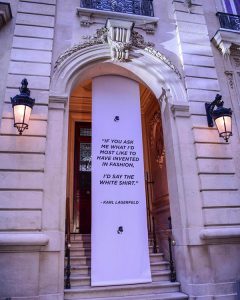 According to the New York Times, drew dozens of high-profile participants, including the retailer Sarah Andelman, the model Eva Herzigova and Alessandro Michele of Gucci, and asked them to create bespoke white shirts inspired by their personal memories of Mr. Lagerfeld. An additional seven shirts — by Ms. Roitfeld, Cara Delevingne, Tommy Hilfiger, Sébastien Jondeau, Diane Kruger, Kate Moss and Takashi Murakami — have been replicated 77 times each and are available online for $777 in the United States and 777 euros in Europe on the Karl Lagerfeld and Farfetch websites.

All proceeds will be donated to Sauver la Vie, a charity Lagerfeld himself supported.