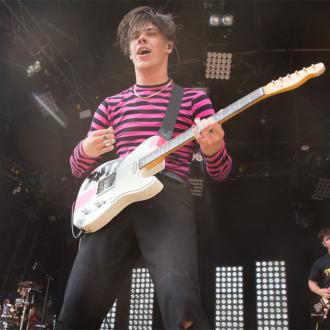 The ‘Loner’ rocker has unveiled his latest record which was recorded during his sold-out 10th October 2018 show at Vinyl in Atlanta and the 12-track set kicks off with ’21st Century Liability’ – the title track of the musician’s 2018 debut album.

The record also includes searing versions of ‘I Love You, Will You Marry Me’, ‘Psychotic Kids’ ‘California’ and ‘Die For The Hype’, while fans can also choose from an assortment of album bundles.

The 20-year-old singer kicked off 2019 with the release of ‘Loner’ which NME praised as ”one of his biggest anthems ever” and last month released ’11 Minutes’ featuring both his girlfriend, Halsey and Travis Barker.

The ‘Kill Somebody’ hitmaker previously admitted he was ”s****ing himself” when the Blink-182 drummer came into the studio to work on the track.

He recalled: ”We were in the studio recording it and I said it needs a real drummer on it. She’s amazing, we created some magic but it needed some energy, it needs to sound like a Blink-182 record. She’s like, ‘Oh I’ll just text Travis Barker’.

”[Travis] was in the studio and 10 minutes later [he was working on the track]. I literally s**t myself – s**t myself thinking about s****ing myself.”

The British star says the song was completed within just three days of the trio being in the studio.